All along the NH17 towards Mumbai from Konkan you will find the king of fruits and the fruits of the season, mangoes, being sold by the highway. Except in the town of Pen, where the mangoes are outnumbered by shops selling Garlic, Garlic Chutney and Garlic flavoured pappads.
at May 31, 2010

At a Highway Restaurant: Gents, Ladies and Marathi Male.

Translation: Ladies, Gents (written in Devnagari sript) and Purushasati (For Men in Marathi)
at May 30, 2010

The Korigad Fort as seen from Aamby Valley at night. It's steep wall of the fort lit up by powerful lights and looks majestic at night.

This is one of the two gates into the fort. As soon as the monsoon strikes, it changes colour to the bright, Sahayadri green. It's a 30 min., almost vertical climb up the stairs from the base.

Compared to the other Forts in the region, the Korigad is a dwarf. However, that's made up by the large plateau top with two ponds with a sizeable puddle in the middle in the height of summer. This barren looking place hides the foundations of buildings, ammunition dumps and the 6 canons that protected the Fort. Among the structures, only the perimeter walls survive. There are a couple of temples that have been rebuilt, but are ugly recent Indian concrete box structures.

One of the two temples. This one is dedicated to Shiva, I guess.

The biggest of the 6 canons of Korigad. This one has a name. It's known as the Laxmi Toph.

The small and nameless canons, rusting in peace.

And finally, something that will go back to dust, sooner that the canons.
at May 25, 2010

Disco Night in Aamby Valley
Urban India loves to escape the city but can't leave their remixed filmi music behind.
at May 23, 2010

An old Independence Day greeting from the Sahara group chairman.

The developers of the Aamby Valley property seem to wear patriotism on their sleeve. Much like the NCP when they started off and asked cinema halls to play the National Anthem,etc. However, the NCP seems to have forgotten the first name of the party name these days and is wallowing in the shallows of dirty regional politics.
at May 22, 2010

View of the cottages in Aamby Valley from the top of the Fort.

Gated Community Vs. Fort
The almost 500-year-old Fort of Korigad near Lonavla, Maharashtra borders a modern version of a fort - the gated community called Aamby Valley built by the Sahara Group.
To enter the gated community, you need to either buy an expensive home in the vast development or stay at the luxurious resort within. And even then, you will be patted in, sniffed at by dogs, baggage x-rayed and put through the security exercise that happens in Mumbai's 5 star hotels.
Luckily the fort is now abandoned and you can just walk up the steep hill side from the Lonavla side and enter the fort through the large, open gate. Instead of the well-oiled guns down in the valley, you have rusting canons or tophs lying around to be examined.
at May 21, 2010

Aamby Valley is a huge gated community close to Lonavla. It's got scale and the entire tick mark list of what a Shining India citizen needs, including an air strip. And if you do not have a car to zip around the ups and downs of this hill valley in the Sahayadri, you can call for one of these vehicles or golf carts to take you around.

These people are actually queueing up to pay their taxes.
The sale of Indian-made foreign liquor, alcoholic beverages and wine are controlled by the state government. You have to queue up in 'Consumerfed' shops with the trademark Red and White walls to get your bottle. These shops are an essential part of Kerala state revenue (Most Indian states actually). It ensures that the prajas empty their pockets for the state at shops like these, daily.
This along with revenues from lottery is what keeps a state that has a large tax free income coming in from the Gulf states, going. So tax paying Indians, the men who work for daily wage that we believe are not taxed, do pay taxes, daily. Ask their family. Who actually think that drinking is the lesser evil. Gambling is considered the greater one, because like they say in the South - "At least the drink stays in the stomach". Not the money you gamble away.
Also see: A lottery dealer in Kerala.
at May 18, 2010

A poster in Tharoor's constituency.

The film poster in the background stars Suresh Gopi, a Malayalam actor who is famous for delivering punchlines in English.
at May 16, 2010

e
An abandoned 'Light Refreshment Stall' at a boat jetty on the Kayankulam Estuary Backwaters.

This village sits on narrow strip of land between the backwaters and the Arabian Sea. Earlier, the boat was the best way to cross the backwaters and this snacking place by the jetty would've found customers. Now, a bridge to the south has made commute very easy and has killed this shop.

This village was hit by the big tsunami in 2004, destroying homes and killing over a hundred people. The bridge would've been more useful then.
at May 15, 2010 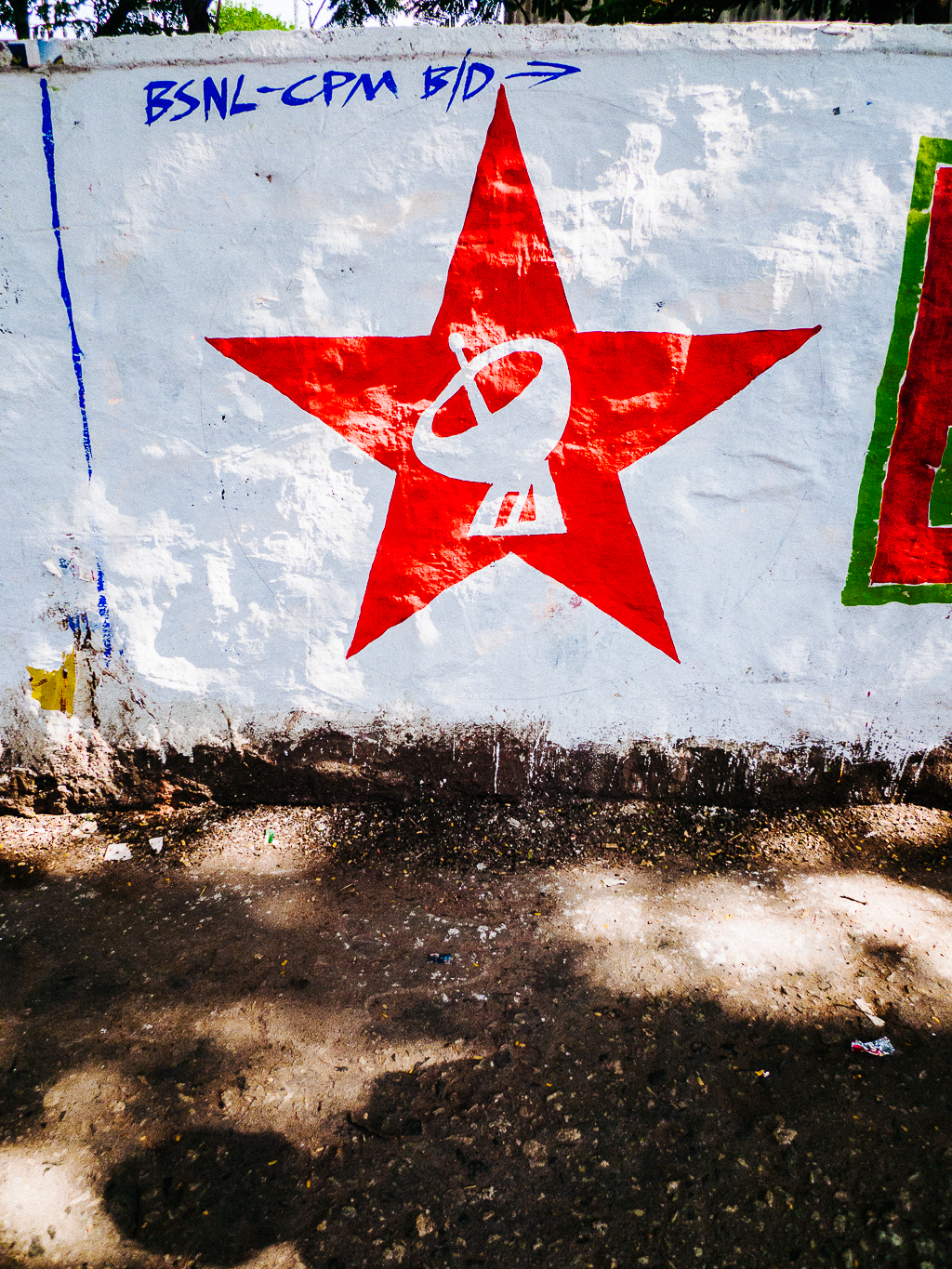 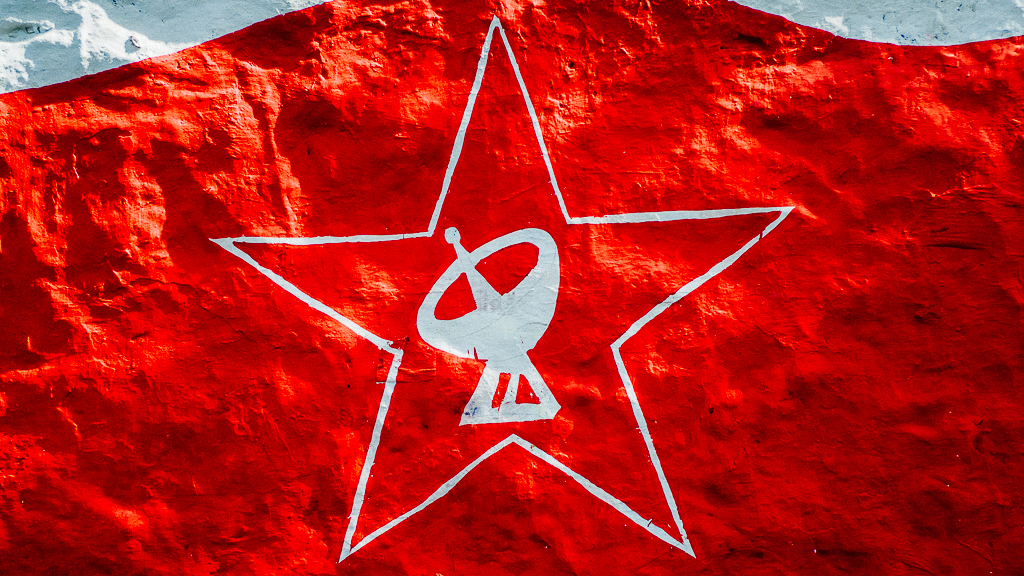 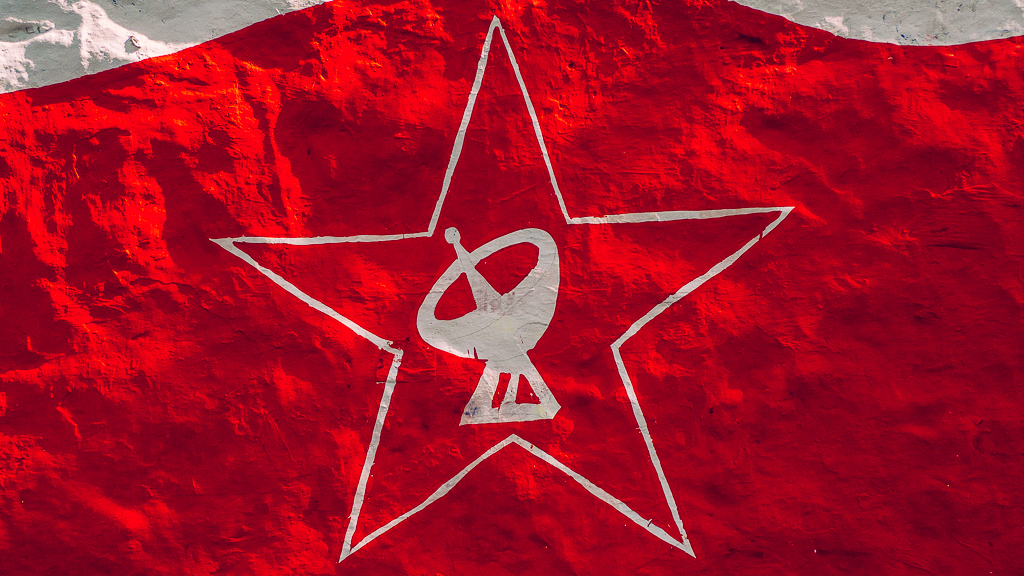 Inquilab. It's zinda and kicking on Kerala walls and streets. This is the flag of the left leaning BSNL Employees Union.

A Guru Swamy at work. He's a tailor.

The Guru Swamy holds a very important position among the millions of Ayyappa devotees in all the four South Indian states.
He's usually the first one in a social circle who has made the trip to Shabarimala shrine when the trip was treacherous and the path was filled with stones and thorns as a popular devotional song says. The Guru Swamy knows the rules and regulations that needs to be followed throughout the pilgrimage. The right way to tie the sack that all devotees carry on the head for instance.
He also knows about all the temples that come on the way to Shabarimala. And that's the reason he's made the leader of the pack.
This also rubs off on his life for the rest of the year and the leader ends up being called Guru Swamy for the rest of his life.

It's a colourful, spiral brick structure that you can't miss at the entrance of the bus terminal. Once you step in, you realise that it's a climb up the spiral to find a seat. The design is very simple with the kitchen at the bottom, the loo up in the middle and the manager's office and staff rooms on the very top.

The tables are part of the building and functional. The food is pucca Malayali with the lovely smell of dosas and beef fried with coconut and curry leaves.

The tables at the bottom of the spiraling restaurant were occupied with travellers with luggage and the ones of the top by lovers from the local colleges. But it's best to sit closer to bottom and see the different kinds of people who pass. It's a cross section of the crowd at the Bus Station. The Govt. employees who stay in the outskirts of Trivandrum. The Keralites who have come down to get work done with the Govt. departments in their capital city. The traders from Tamil Nadu that's just a few kilometers south of Trivandrum. Software professionals with laptops and bags having a bite before running to catch the Airavath to Bangalore and many more.
But it's the building that's most interesting. Built in Laurie Baker style. More on him, here. with a a picture of the Coffee House exterior.

India Coffee House. Trivandrum.
It resembles the new one on Church Street, Bangalore.

However, my senses prefer the coffee in Bangalore. And even though Kerala is also a coffee growing state, it's a chai drinking state. Chai with lots of milk.
at May 07, 2010

Old style, offline lottery is big business in Kerala. On every major street, you will find old dilapidated Ambassadors, tricycles and corner shops with beedi smoking men selling tickets by the dozens. And you have men on Hercules cycles bringing lottery tickets to every Keralite doorstep. And they all have the same chant - Naale Aaan Nalle Aaan Nalle Aaan!(It's tomorrow!)
Along with alcohol, lottery forms a very important money collection tool for the state government (more on that soon). Lotteries from the North Eastern states are also allowed to operate and Kerala also contributes in a big way to the Gross National Happiness of Bhutan.

Shown above is a roadside, wholesale lottery shop near Trivandrum Central run by a Tamil businessman. The old, big nosed, Sridevi from the early 80s is his good luck. The Gandhi notes however are crisp and new Gandhi ones.

Bus Board destinations: Thrivananathapuram/Neyyatinkara
Via Alapuzha Kollam.
at May 05, 2010

The classic, simple, red and yellow design of the KSRTC Fast Passenger bus service. It's not been changed for decades now.
at May 02, 2010